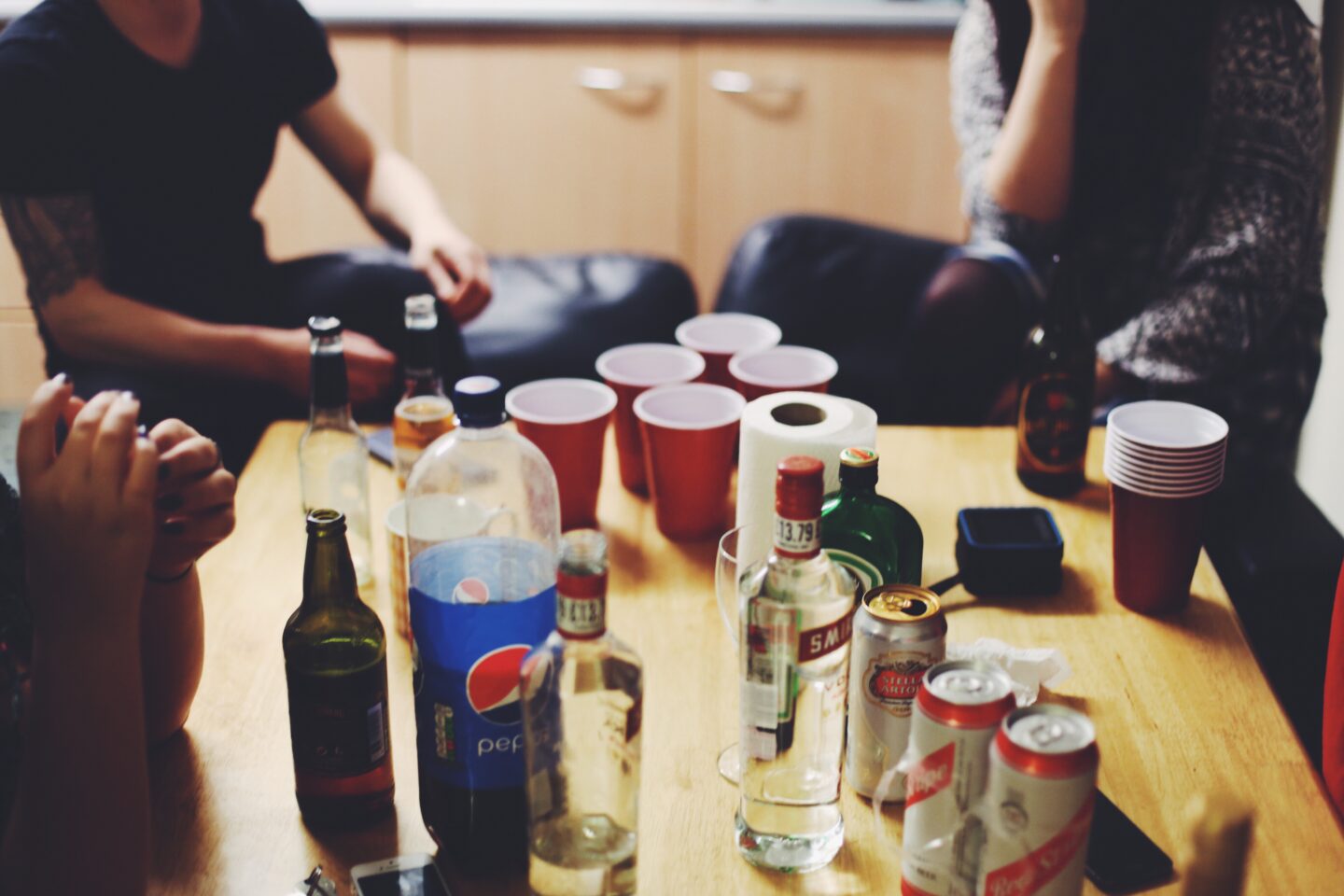 In college, some of the best nights are spent in your dorm room! Whether you are spending the night in drinking with some friends or are pre-drinking for a night out, there are some seriously fun dorm room drinking games that you can play!

All you need is a good few friends, something to drink, and maybe a few accessories here and there, to play these games that will definitely help you create some of your best memories in college!

*Ahem, mandatory disclosure: Drinking ages vary greatly by country but we do not condone underage drinking, whatever they may be where you live. Please consume responsibly.*

Beer pong is supposed to be played with some space and a big table, but you can make it even more fun by playing it in your dorm room!

Improvise however you need to make the beer pong game fit into your room. Have a smaller table, place the cups on the floor, or even place them on shelves around the room – the extra creativity can make for a fun and interesting game that everyone will get into!

All you need are some simple beer pong cups and beer pong balls, and something suitable to fill the cups with! Make teams of two people each and battle it out to see who comes out as beer pong champion!

Quarters is a drinking game that is as simple as it gets, but it is one that never ceases to entertain! It is a perfect game to play in a cramped door room because you and your friends just need to sit around a table to play.

Place a glass of water into the center of the table to start. Each player takes a turn at placing a quarter on the edge of the table and attempting to flick it into the glass.

If a player successfully gets the coin into the glass, they nominate someone to drink. They can also make up a rule for the game, such as banning everyone from saying the word “drink”, and there can be drinking consequences for these rules.

Avalanche is another suitable game to be played in a dorm room, as not much space is needed at all.

To play, all you need is an empty glass and a die. Players sit around the table and must have a full glass of alcohol. Working in a clockwise motion, everyone takes a turn to roll the dice. Each number on the dice means something specific. Here are some general rules to play by:

1: The player skips this turn and gives the dice to the person next to them

2: The person pours some of their drink into the cup in the center of the table

3: The player must drink whatever is in the center glass

4: The player shouts out “floor” and everyone needs to either point to the ground or lay on the ground quickly. Whoever performs this action last needs to drink the contents of the center glass

5: The player gets to nominate another player to drink the contents of the center glass

6: Player pours some of their drink into the cup in the center of the table, and gets to make up a new rule of play, such as requesting that everyone is called by the name of the person to their right

So whatever a player rolls and lands on, they need to follow that rule to play!

Edward 40 hands can be a little intense, but it is also a fun game that you can play while doing other things in your dorm!

To play this game, a player or multiple players duct tape a 40-ounce beer bottle to each of their hands or to one hand. They cannot have the bottle removed from their hand until it is finished.

To make the game even more intense, you could set a timer for when they need to finish the beer by. Anyone who has not finished their beer by the time the timer goes off either needs to perform some silly task or simply pour the beer over their head!

If it’s just you and a friend (or you have multiple battleship games), you can turn this fun game into a drinking game.

This is a fun and quick drinking game you could play in ANY dorm room.

Up & Down The River

Up & Down The River is played using two decks of cards. One player is made the dealer at the beginning of the game. They hand out four cards to each player from one deck of cards, and the cards are placed face-up in front of each player.

The dealer then draws a card from the other untouched deck. If any player has this card in the deck, they must have a drink. The next round gets even more intense. With each new round that is played, the number of sips a player needs to have per matching card doubles.

In the fifth round, the dealer draws a card, and whoever has the combination of the total five cards drawn gets to give away four drinks to other players, either choosing one player to have all four drinks or splitting them among the group.

Jenga is fun on its own, but with drinking, it is made that much more entertaining! You will need to have a set of Jenga blocks and a Sharpie marker to play with.

You and your friends can come up with a whole lot of different rules to write onto different blocks. These rules can include:

There are so many different rules that you can come up with. Write all of these onto the blocks and build them up like you would with a normal Jenga game.

Everyone takes a turn to remove a block from the tower, and the block they remove should have a rule on it. They need to follow this rule before the next person goes. Whoever collapses the tower needs to down the rest of their drink.

This is a great game to play in a small dorm room, and once you have come up with all the rules and written them on the Jenga blocks, you can use the set over and over again.

Enjoyed this? Make sure to check these out:

Are Guys Allowed In Girl Dorms? (FIND OUT!)

You may also enjoy: